skip to main | skip to sidebar

Awhile back, I posted about how I missed the boat by passing up some empty matchboxes at a clothing/stuff exchange. I began the mental lament again when I saw this post about making your own matchbook valentines. I don't even give out valentines, so I'm not sure what all the anguish was about, but I was excited to see that the article includes links to templates for making your own matchbooks.

One of my favorite pastimes is making things and then taking silly pictures of them. Photographing items with absurd props seems to magnify their cuteness, as demonstrated below. 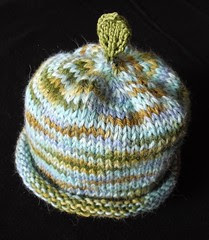 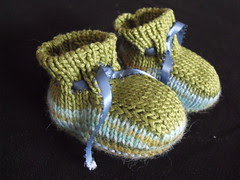 Alone, these items might be considered somewhat cute because of small details such as a knit leaf or ribbon ties. However, much of the items' cuteness is due to their small size, which is not visible in photographs with them unmodeled or on a plain background with nothing around for scale. Note in our next photo, Figure 3, how their cuteness is magnified by the use of props, such as being modeled by a stuffed whale. 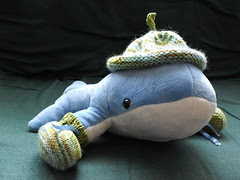 In our final example, Figure 4, you will note that the photo becomes even cuter through creative posing of the whale. Even though in Figure 3, there is already an incongruous combination of elements, such as a sea-faring mammal wearing shoes and a hat, Figure 4 increases the readings on the cute-o-meter with the whale imitating a tri-ped by standing on its tail and two bootie-clad flippers, and hat worn slightly askew for a touch of insouciance. 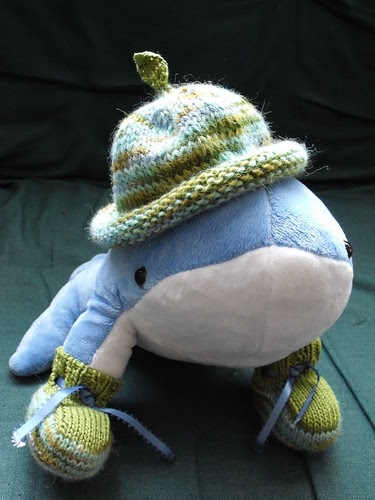 That's right. A very productive use of time.
Posted by Katie at 11:13 PM No comments:

A few weeks ago, I went to a clothing swap. People bring the clothes that they don't wear anymore, sort them by size, and then get to take home items that other people brought. It's actually more of a general stuff swap, though, since some other items available to take home included food, an air mattress (with fixable hole), shoes, and fabric. Clothing swaps are pretty exciting since you get to try out clothes that you might never have bought for yourself, but are kind of cute anyway... plus, everything is free! (freeeeee!) 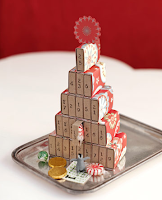 At the end of the night, as we cleaned up to donate the extra things that no one wanted, among the remnants was a bunch of old matchbooks. I wondered why anyone would save and then go to the trouble of bringing empty matchbooks, but guessed that maybe there could be some craft project involving old matchbooks.

Lo and behold, Sweet Paul has made a simple and very cute advent calendar out of 25 of them. I sort of (but not really) feel sad that I didn't take home the empty matchbooks from the swap.
Posted by Katie at 3:48 PM No comments:

Your humble blogger is currently learning how to solder and make bezels. This doesn't make for great photography-filled blog posts for several reasons. First, the torch I was using was running out of gas and wasn't very hot. Somehow, this led to me eventually melting through one of my bezels because I got bored of swirling the flame around the ring and must have kept it in place for too long. It was not pretty.

At that point, I wanted to ask my teacher for help, but she was assisting her assistant, who had accidentally spilled fifties or hundreds of dollars worth of silver grain onto the floor. Eventually, I started asking people who looked bored for assistance. One very helpful person became a little too helpful and then finished my bezel for me. That could have been worthy of photographing, but even though I did part of the soldering, I didn't feel like I had actually made the bezel. I put it in the pickle to clean it up, and then forgot it there. Oops. Thus, no photos.

On the other hand, holiday shopping and fear of absurdly luxurious and/or crowded shopping areas has led me to a lot of online window shopping. I like gardening a lot, so I think this tulip USB hub is quite cute. I'm not sure it would be as cute with things actually plugged into the ports, but I guess that's another issue altogether.
Posted by Katie at 6:46 PM No comments: 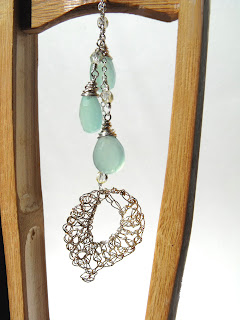 I'm trying to make new items for the shop, so I can update it daily. This has proven to be pretty challenging, but still kind of gratifying. I seem to find that every new piece becomes my new favorite! Fickle, I know.

I had this silver crochet leaf lounging about for awhile. I had thought that I would somehow combine it with the sapphire beads from the mobile earrings below, but it didn't seem quite right. After a month or so of hanging out, the leaf started to lightly oxidize and became copper-colored on the edges. I thought it matched nicely with these chalcedony briolettes, so I put this necklace together.
Posted by Katie at 1:41 PM No comments: 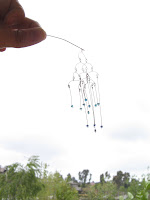 A few months ago, I decided that I wanted to make earrings that were like tiny mobiles. I set about making a prototype and ended up with the mobile above. It was a little too long and with a little bit too many elements, but was still cute. I hung it from a potted plant on top of my dresser and let it marinate for awhile. 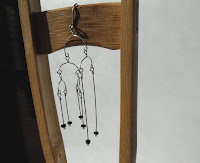 Recently, I decided to work on them again. I used sterling silver wire, substituted out the glass beads for tiny cut sapphires, and worked on the balance. I came up with the tiny mobile earrings at left, and am thinking about other styles. I think it would be cute to use different beads to hang from the mobile arms, like heart shaped briolettes or ovals, or weld on shapes cut from sheet metal.

I have pretty short hair, but I'm guessing if you have long hair, you might want to wear it up with these earrings unless you want to end up with a mobile tangle.
Posted by Katie at 12:19 PM No comments: 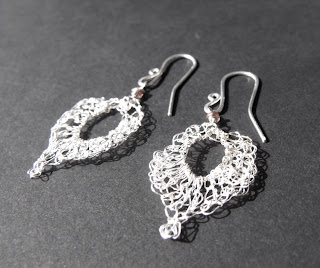 I always kind of like the idea of matching jewelry sets, even though I don't really own any. It's like, if you wanted to, you could be all coordinated! Haha. With this in mind, I created these new crochet sparkling leaf earrings to match the necklaces that I have had up in the shop for a little while.

These days, I have to clear away the fallen leaves from the plants on my tiny patio garden, or one huge leaf could cover an entire plant, so this set is seasonally appropriate. I may live in California, where the leaves don't change color as dramatically, but they still fall.

I use wire-wrapping and fiber techniques with metal and gemstones to make unique jewelry designs. I hope to open my online store within the next couple of months.

Here I will share updates on what I'm working on, what inspires me, and whatever else strikes my fancy at the moment.

Thanks for stopping by!